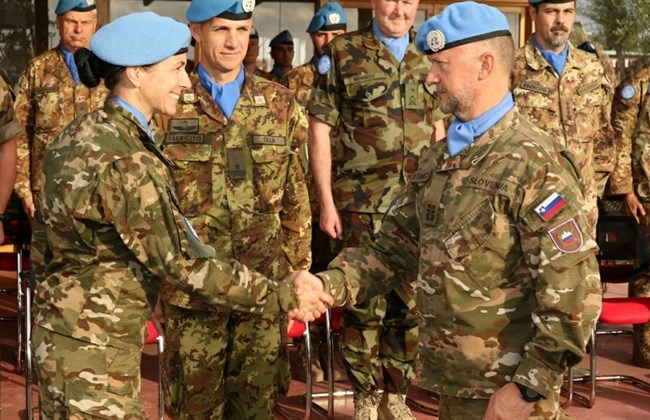 BEIRUT: All 15 members of the U.N. Security Council Wednesday voted to renew the mandate of the U.N. peacekeeping force in Lebanon for a further year, with some minor adjustments. The Council renewed UNIFIL’s mandate in Resolution 2373, which dictates the duties and jurisdictions of the force. UNIFIL members are deployed along the U.N. demarcated southern “Blue Line” that marks the border with Israel and have been working to maintain the cessation of hostilities between the two countries.

The resolution will see UNIFIL continue in its current mandate but with a greater focus on scrutinizing Hezbollah’s activities. U.S. Ambassador to the U.N. Nikki Haley has been calling for UNIFIL to take a stronger stance on Hezbollah in south Lebanon and told reporters ahead of the vote that she was “very happy” with the final draft of the resolution.

UNIFIL has been deployed in south Lebanon since the late 1970s but was bolstered after Lebanon’s 2006 War with Israel.

Haley welcomed the renewal in her remarks to the Council while criticizing the effectiveness of the peacekeeping force to date, particularly in regards to Hezbollah’s activities. Washington designates Hezbollah as a terrorist group.

She said earlier this month that UNIFIL force commander Maj. Gen. Michael Beary had an “embarrassing lack of understanding” of Hezbollah operations and arms after saying that the force had no evidence of the group establishing military installations in the peacekeepers’ area of operations.

Haley acknowledged that “UNIFIL has a difficult mandate,” adding that “the U.S. has strongly supported this mission and will continue to do so.” However, she again criticized UNIFIL’s Beary, saying his misunderstanding of the situation in the area was “baffling.”

She pointed to UNIFIL’s primary role in helping Lebanon to ensure security, but said, “For too long UNIFIL’s leadership has failed to make sure this goal is realized.”

She said, “Conditions in south Lebanon are very dangerous today, the clouds of war are gathering,” adding that Hezbollah has used the relative quiet since 2006 to rearm itself. “Hezbollah admits it and brags about it.”

Haley described reforms to the mandate as giving “UNIFIL robust authority to help Lebanon keep the south safe” as well as step up patrols to stop Hezbollah activities in the area, in particular, the illegal flow of arms over the borders. Most importantly, she said, it demands UNIFIL report on incidents when patrols are stopped by road blocks. “We want to learn what is going on beyond those road blocks,” Haley said.

Resolution 2373 also specifically highlighted the April 20 media tour hosted by Hezbollah in the border area. “Expressing deep concern at all violations in connection with Resolution 1701, in particular, the incidents which occurred on April 20, 2017, as underlined by the secretary general … commending the immediate reaction of Lebanese authorities and recalling the importance of the control of the Government of Lebanon of all Lebanese territories.”

The resolution made no mention to Israeli overflights and the regular violations of Lebanese sovereignty by land and sea. However, it called on Israel to immediately withdraw from occupied northern Ghajar village that has been occupied for decades. There had been tensions ahead of the vote with France calling for an unchanged renewal of the UNIFIL mandate.

However, France’s U.N. Ambassador Anne Gueguen tweeted after the vote that “France welcomes the unanimous renewal of the UNIFIL mandate. UNIFIL is a regional public good that plays a crucial role of interposition.”

During the session, she said that while stability had been maintained in south of Lebanon for near a decade, the degradation in the security situation in the region required the continued presence of the peacekeeping force.

Foreign Minister Gebran Bassil met with diplomats from the permanent five members of the Security Council Tuesday in Beirut ahead of the meeting in New York. He called on the diplomats to see the UNIFIL mandate renewed without change but highlighted the need to address daily Israeli violations of Lebanon’s sovereign. He said that UNIFIL was key to the stability of south Lebanon.

A version of this article appeared in the print edition of The Daily Star on August 31, 2017, on page 1.