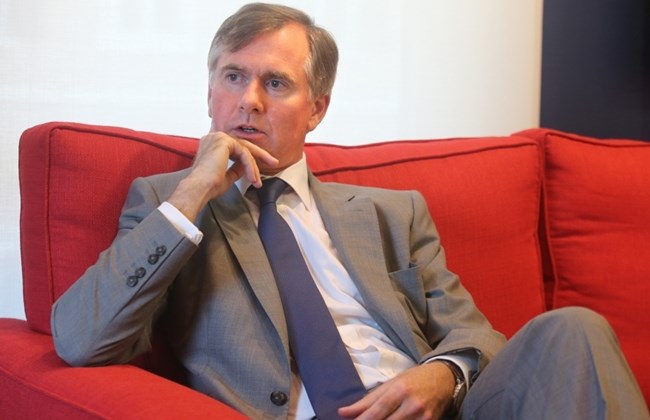 British ambassador Hugo Shorter speaks during an interview with The Daily Star in Beirut, Thursday, Oct. 5, 2017. (The Daily Star/Hasan Shaaban)

BEIRUT: U.K. Ambassador to Lebanon Hugo Shorter warned that while Syrian President Bashar Assad remained in power it wouldn’t be safe to return refugees from Lebanon. Speaking to The Daily Star in a lengthy interview last week, Shorter warned that the “tremendous brutality” of the regime was a stumbling block to a political settlement or refugee return.

The ambassador reiterated the U.K. government’s long-held stance that for an end to the conflict in Syria, Assad has to step aside. However, when asked how the U.K. would negotiate if Assad doesn’t vacate his post, Shorter said simply: “We don’t accept that scenario.”

“We continue to say that for real stabilization, reconstruction to happen in Syria there needs to be clear transition underway away from the Assad regime,” he explained.

While reiterating that refugees in Lebanon should return to Syria, Shorter said the idea that areas of the country were now safe enough to begin this process was “misrepresent[ing] what is happening there.”

The ambassador cautioned against rushing the return of Syrian refugees, saying this was a process that had to be done correctly. “I think there’s a risk of going down the wrong track with a premature decision [to return Syrian refugees] which everyone will live to regret.”

Lebanon is currently hosting over 1 million registered refugees from Syria, but the government places the true figure at over 1.5 million.

The yearslong crisis has led to significant fallout for Lebanon and an economic downturn.

“You have to get the return process right,” he said. “If you do it too early and you get a first wave of returning refugees who have a bad experience, who are attacked or who can’t sustain their families and leave a second time then getting them to return to their home countries a second time becomes much much harder … and you create a lot of hardship, extra hardship.”

“This has been a difficult diplomatic process over the last few years, one that we have been heavily engaged in … but what is clear to me is that we haven’t reached an acceptable equilibrium … Peace isn’t just the nonexistence of armed conflict, it is also about the political context and the role of the state.”

With talk among analysts and even members of the international community turning to the reconstruction of Syria, there has been a lingering question over whether the West – the U.K. included – would fund reconstruction if Assad remains in power. Shorter pointed to a joint statement on the matter made by a number of countries – including the U.K., U.S., Saudi Arabia, France and numerous others – on the sidelines of the U.N. General Assembly last month. “Recovery and reconstruction support for Syria hinges on a credible political process leading to a genuine political transition that can be supported by a majority of the Syrian people,” he read from the statement.

He accepted that there was a humanitarian imperative to help, but added that “we fund humanitarian aid in Syria and the reality is that the regime has put all sorts of obligations in the way of the delivery … We can see that the Assad regime isn’t remotely serious about allowing refugees to return safely to their homes and resume a normal life.”

Over Shorter’s two years in the post, he has been a staunch supporter of the Lebanese military. “Why do we support the Army? There are many good reasons, the Army is obviously essential to Lebanese security and … our support is in line with our view that the state needs to have the monopoly of force here in Lebanon,” he said.

This, he added, was “very important if you think like I do that a strong state is essential to Lebanon’s stability and to preserve Lebanon’s model of coexistence.”

But pressed on the role of Hezbollah in the country, the U.K. diplomat stressed “that all non-state armed actors should disarm and that’s clear and that underlines our position toward Hezbollah.”

He added that the EU and U.K.’s designation of the party’s military wing as a terrorist organization was “not about to change.”

“We believe that a country where all communities have a place, where coexistence is guaranteed requires a strong state and non-state actors that do not represent the whole community will, in the end, not be able to provide that kind of country which we think is the kind of stable and prosperous country the Lebanese people deserve,” Shorter said.

However, he expressed his concerns about Hezbollah’s growing regional influence.

“We’re extremely concerned by Hezbollah’s regional activities, destabilizing activities that have fueled conflict in Syria, Yemen and Iraq. Here in Lebanon, there is a decision for the Lebanese people as a whole as to what kind of country they want to live in,” he said.

Touching on recent U.S. and Israeli rhetoric regarding Hezbollah and its relationship to the state – particularly recent comments that the two were now indistinguishable, making the Lebanese state a legitimate target in future conflicts – the U.K. ambassador called on all parties to step back in order for diplomacy to prevail.

“That kind of rhetoric on both sides is not helpful toward maintaining stability here,” he said.

“I don’t believe that any form of military confrontation or conflict is ultimately the way to guarantee stability over the long term … There is a question of how at some point dialog can be made to happen in a constructive way but that to my view is the central question.”

He also described the Israel-Palestinian issue and the impact on Lebanon as “one of the knottiest problems in international relations.” However, he said that Lebanon’s leaders needed to deeply consider what was in the best interests of the Lebanese people when it comes to relations with Israel, adding that this should lead toward a model of peaceful relations.

While the ambassador admitted that the right of return for Palestinian refugees – a central issue for Lebanon given the estimated 450,000 Palestinians in the country – would ultimately be tied to a two-state solution, he said that Lebanon making the right of return a condition for talks was a barrier to the creation of a more peaceful relationship.

Touching on local political developments and next year’s slated parliamentary elections, Shorter said: “A democracy without elections isn’t a democracy. That’s the bottom line. Parliamentary elections have been postponed three times now … so it’s very important for Lebanon and for its reputation, for its role in the region as a bit of a model of democracy that elections now happen according to the agreed [law].”

He added between now and next year’s elections, there was a lot Lebanon could do to start improving the economic situation in the country. But he admitted that these were “difficult decisions in that they are not all easy with only upsides.”

“As we’re seeing on the budget and taxation … increasing taxation isn’t popular anywhere but I think it is within the government’s reach to make balanced decisions on revenues and expenditure … [and it] would gradually strengthen Lebanon’s underlying economy,” Shorter said.

The ambassador added he felt this would encourage foreign investment but that issues, such as tackling corruption, regulating tender processes and the overall business environment, would be key to building investor confidence.

Touching on regional interference in Lebanon and talk of re-engaging with the Syrian regime, Shorter said that ultimately this was a choice that politicians had to make about what kind of country they were working to build.

“I’ve always said that Lebanon should be an entirely sovereign and independent country,” he said.

“But I think that in the end, it’s in the hands of Lebanese politicians to decide that they will take their own sovereign decisions for the good of Lebanon and not for the good of Syria or Iran or of anyone else.”

“I really don’t buy the argument that they [politicians] don’t have a choice, I think in the end you have a choice to be free but you have to make that choice,” he said.

A version of this article appeared in the print edition of The Daily Star on October 09, 2017, on page 3.