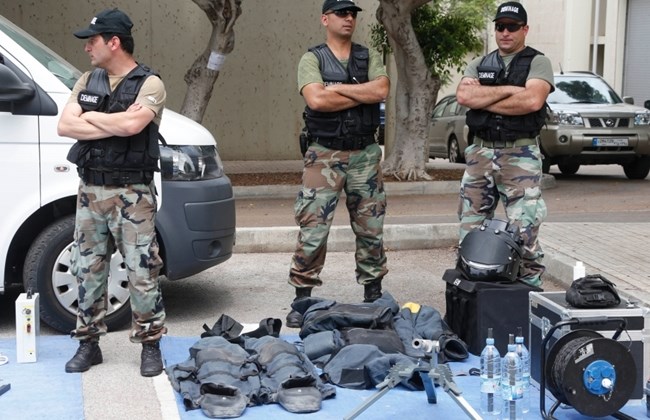 Security personnel train constantly and share intelligence in order to remain sharp and ahead of the bomb-makers, (The Daily Star/Mohammad Azakir)

BEIRUT: It takes five things to make a bomb and four are easily available in Lebanon, so the ISF’s head of explosives Maj. Bassam Bitar said they must train constantly to keep Lebanon safe. “To make a bomb … five items are necessary: a container, a battery, a wire, detonator and explosives. You can find four in all markets, but explosives can’t be bought in Lebanon … the fertilizer you import is under the percentage of nitrate used in bombs,” Bitar told The Daily Star from his office in Corniche al-Mazraa’s Helou barracks.

“We must train and research all the news in this field because terrorism progresses quickly, and terrorists make bombs to destroy and to damage. Because of this, we must be ready to counter this all over the country,” Bitar said.

With regional turmoil and the long and bloody civil war in neighboring Syria posing a daily threat of violent spillover into Lebanon, as well as domestic tensions and recent violence in the country, Bitar said his teams of Explosives Ordnance Disposal officers have a tough job.

Despite the high pressure and the near constant stream of alerts he gets of suspicious items found that need his attention, Bitar sat back calmly to talk about progress at the EOD department over the last few years.

“Every hour we receive a call [about suspicious items], so we have to be relaxed,” he joked as he took a call about an item found near the Kuwaiti Embassy in Beirut – another false alarm. “When I came [to the unit in 2010] I only had 13 EODs to cover all of Lebanon, but we progressed quickly and we now have 55,” he said.

With the main office in Beirut, the officers are spread out across the country in every ISF operation room so they can “work with high speed to detect all suspect items, cars, explosives and anything suspicious.”

Bitar insisted that the overall number of EOD officers was not as important as the overall political situation. If factions within the country are at odds, this leads to a deterioration in the overall situation and can lead to more call-outs and more attempted attacks.

“If we have a political problem we have conflict between the political [factions] and it reflects on our job. But if it’s safe now,” he said. “With the current number [of EOD officers] we can cover the whole country but if the situation becomes very difficult [politically] we can have 20 or 25 missions in one day. But now the situation now is good.”

To make it more difficult to obtain materials for explosives-manufacturing in Lebanon, the ISF keeps lists of dual-purpose items – such as high nitrate fertilizer or small metal ball bearings – that have both a legitimate commercial use and the potential to create bombs. Items on this list are regulated by the customs authorities to try and prevent people without valid need bringing them into the country.

However, with porous borders and leftovers from the Civil War, there are many ways to get hold of high-grade explosives. “In Lebanon, we had 30 years of war and in this we used all kinds of explosives … in all houses in Lebanon you’ll find things because people like to save something … for insurance. Every day we find something,” Bitar said.

“It is definitely possible to repurpose old military equipment for newer or modified uses … there is the potential for newer items to be brought in or to augment the old items,” said Devin Morrow, a Beirut-based technical adviser at Conflict Armament Research, a U.K.-based organization that works with arms and explosives cataloging which is undertaking training with EOD officers.

Lebanon was rocked by a number of large car bombs through 2013 and 2014, including the Aug. 23, 2013 twin Tripoli mosque bombing that killed some 42 people and wounded over 400. But in the last few years, both the regularity and the size of explosions in Lebanon have decreased, Bitar said. He attributed this to increased security on the border making it harder to bring in large quantities of explosives.

“When the border was not very secure we know we had very big explosions, four or five happened in Dahiyeh [Beirut’s southern suburbs] and all the big car [bombs] came into Lebanon across the border. But now we secured it and we don’t have these big explosions … we have the Army and Hezbollah [on the border] so it’s difficult [to bring in cars laden with explosives]. It’s very secure, not 100 percent but more than in 2013 … although it’s [still] very easy to bring in a small [explosive] belt,” Bitar said.

As he noted, smaller bomb belts can still be smuggled in or made domestically but these carry much smaller quantities of explosives than vehicle-borne devices. To prevent this, there is a constant battle ongoing between EOD officers to detect explosives, and those trying to evade the countermeasures.

“The terrorists use progresses in technology to make intelligent bombs. They now use cellphones, internet, wireless, all new technology is used in this field of explosives, they don’t make traditional bombs now,” Bitar said, adding that old-style manually triggered bombs are rarely used anymore.

Bitar also described how the ISF is able to gather intelligence from the bombs themselves in order to break up terrorist groups.

“We know every terrorist organization has a style of how to make a bomb. In time we can know this model is related to this organization, that organization uses this kind of detonator, this battery, this wire,” he said. In small explosions it’s possible to identify types of components and even forensic evidence, but in large explosions, few traces are left.

“But if we arrive to stop the bomb we will have everything and we can take fingerprints, DNA,” Bitar said, adding that they provide this to police and the Army to help catch suspects.

This has led to several major arrests of criminal networks. Bitar pointed to the recent attempted bombing of Hamra’s Costa Coffee shop as an example of where significant intelligence was gathered from the unexploded belt, helping authorities track down accomplices.

Improving tracing is a key step to gathering intelligence, Morrow said, and it has been the focus of CAR’s training with Lebanese EOD officers. “It is one thing to be able to pull these things out of the ground but it is another to be able to trace them back and understand how the process of tracing works. It is a skill that not a lot security forces necessarily have right now because they haven’t really had to do much of that,” she said.

To remain sharp and ahead of the bomb-makers, ISF personnel train constantly and share intelligence.

‘’We work with many embassies in Lebanon [to] train … so our EODs are at a high level. We share information with the FBI about all news and if they detect a new item [in explosives] we share the information.”

Bitar said there are several challenges in recruitment: ISF EOD officers must be highly skilled, but are paid the same as regular officers; they undergo more than five years’ training before they can lead an operation; and the danger of the job is an added deterrent. However, they have moved to recruit from university engineering and physics departments to attract already highly educated officers.

Despite the challenges of the job and in attracting recruits, Bitar remains upbeat about the future. “We do not get a big quantity of people wanting to come [to the EOD unit] because we [work] in very dangerous places,” he said. “When everyone else goes far away, we must go near to [the explosives] … and the first wrong [move] will be an EOD’s last – but from 2010 until now we have had no accidents.”

A version of this article appeared in the print edition of The Daily Star on March 13, 2017, on page 3.