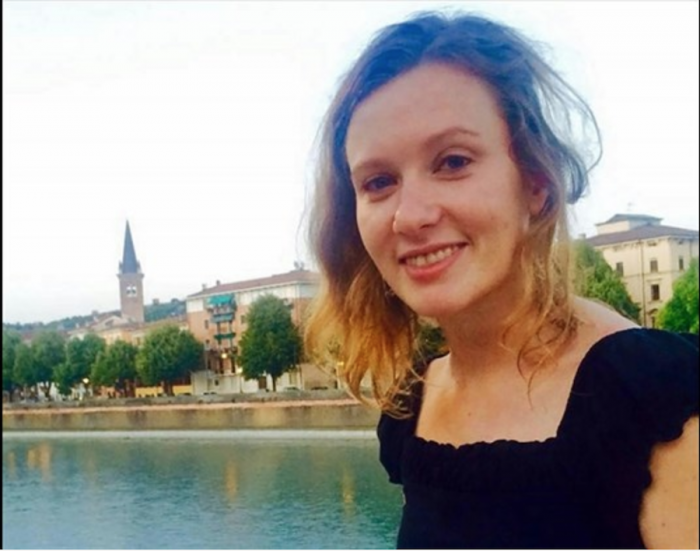 BEIRUT: Rebecca Dykes had been at a Foreign Office colleague’s farewell party before she disappeared Friday night. It was an all-womens affair at Demo, a busy Beirut bar, the night before she was due to fly out herself for the Christmas holidays. Becky, as she was known to her friends, never made it home.Saturday afternoon, Lebanese authorities found the body of a woman in her 30s along the Emile Lahoud road, a major artery out of Beirut, with a rope around the neck and obvious signs of strangulation. An initial autopsy also showed signs of sexual assault, security sources told The Daily Star. Although police released a sketch of the woman they had found, authorities initially struggled to identify the body.

After not hearing from Dykes, friends raised the alarm with police Sunday and it was quickly determined that the body was hers.

The sources told The Daily Star that after leaving Demo between 2 and 2:30 a.m., Dykes was believed to have gotten into an SUV – that was the last time she was seen alive. Security forces found SUV tire tracks near her body, and efforts to identify the vehicle were underway late Sunday. “We are devastated by the loss of our beloved Rebecca. We are doing all we can to understand what happened,” the Dykes family said in a statement released Sunday, also requesting their privacy to be respected.

A friend of Dykes described her to The Daily Star as both “ambitious and selfless.” A close colleague described her as “an awesome person,” and that she was “lovely – a really kind girl.” Kate Johnston, a Foreign Office colleague tweeted: “Utterly shocked and devastated. Becky was a wonderful, kind talented and dedicated colleague. My thoughts are with her family and friends.”

British Ambassador to Lebanon Hugo Shorter tweeted: “The whole embassy is deeply shocked, saddened by this news. My thoughts are with Becky’s family, friends and colleagues for their tragic loss.”

Former U.K. Ambassador Tom Fletcher also wrote on Twitter that “[I] know [Lebanon] will share deep shock and grief at the loss of such a bright star, working on the humanitarian frontline.”

Police confirmed to The Daily Star that a murder investigation was underway, and that all those present at the bar were being questioned. Investigative judges were at Demo bar late Sunday evening and sources confirmed that the owners had spoken with authorities.

Following the news, Lebanese Ambassador to the U.K. Rami Mortada tweeted: “Sincere condolences and heartfelt sympathy. We’re all shocked by this terrible news. Our thoughts are with Becky’s family and friends and the whole team of the British Embassy in Beirut. Everything will be done to unveil all aspects of this terrible crime.”

A graduate of the University of Manchester, Dykes spoke fluent Mandarin having worked as a teacher in China and Hong Kong for four years prior to joining the U.K. Foreign Office. After joining the U.K.’s Stabilization Unit, she went on to work for the Foreign Office and DFID in London on projects from Iraq to Libya before moving to Beirut in January 2017.

A forensic official said authorities were conducting further autopsies and lab tests to determine the timeline of events and whether she had been the victim of a sexual assault. “Our first impression is that it’s not politically motivated,” an official, who is involved in the investigation, told AFP news agency on condition of anonymity.

Investigations are ongoing and no arrests in the case have been reported.

A version of this article appeared in the print edition of The Daily Star on December 18, 2017, on page 1.