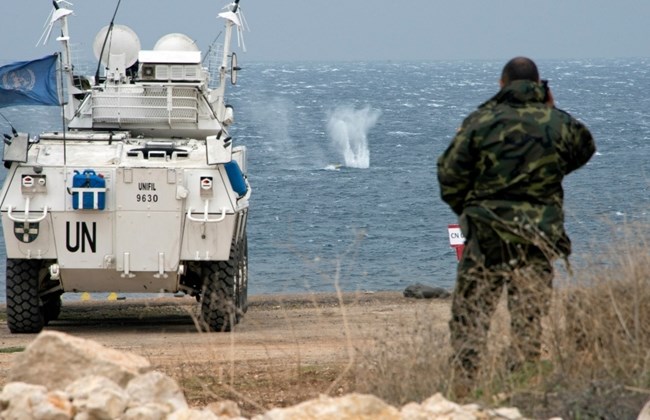 BEIRUT: A long-serving former official has played down changes to UNIFIL’s mandate, despite statements and media reports of a significant development. The vague wording of the diplomatically drafted document, passed by the U.N. Security Council Wednesday evening, leaves a lot to be interpreted by the secretary-general, the U.N. Interim Force in Lebanon’s serving commander, the over 40 troop-contributing countries and the Lebanese government.

This means the day-to-day operations of the force will remain largely unchanged, said Timur Goksel, a former UNIFIL spokesman who served for over 20 years.

“This is just a rewording of the original mandate; I don’t see anything dramatically new in this,” Goksel, now the Turkish editor of the Al-Monitor news website, told The Daily Star.

“They [the U.S. and Israel] made such a big fuss about the renewal, although if you know the history of this place, the same things have been said almost every year when there was a mandate renewal.”

Current UNIFIL spokesperson Malene Jensen said UNSCR 2373 was still being studied and that she couldn’t comment at this stage. However, in a written statement, UNIFIL said Thursday that the vote “expressed a strong commitment to the existing mandate” and that it would “continue to work to fulfill the mandate to its fullest in order to preserve the stability and calm.”

The new mandate “requests the secretary-general to look at ways to enhance UNIFIL’s efforts … including ways to increase UNIFIL’s visible presence, including through patrols and inspections, within its existing mandate and capabilities.” It also calls to “further develop a reporting mechanism in order to provide concrete and detailed information on … issues to the [Security] Council.”

Over the last several weeks, U.S. Ambassador to the U.N. Nikki Haley has lashed out at the status quo in South Lebanon, claiming that there is a dangerous Hezbollah buildup underway and that the current force commander – Irish Maj. Gen. Michael Beary – has an “embarrassing lack of understanding” of the local situation.

“Conditions in South Lebanon are very dangerous today. The clouds of war are gathering,” she said in a statement after Wednesday’s vote. “UNIFIL commander Maj. Gen. Beary’s lack of understanding of the threat Hezbollah poses to the region is baffling.”

Goksel said it was almost unheard of for a serving U.S. diplomat to lambaste the U.N.-appointed military figure. “I feel very uncomfortable reading those comments … this is an officer who has served in UNIFIL before and is respected. I found it totally unnecessary,” he said.

Beary’s current position is just his most recent with the force, having been deployed with UNIFIL in 1982, 1989 and 1999.

However, Goksel did say he felt UNIFIL could have avoided responding to the criticism.

Haley led the charge for a more robust mandate for UNIFIL and celebrated the small additions, saying in the statement Wednesday, “Today we took a very good step forward.”

But her proposal for a major expansion of the force’s mandate was met with reluctance by major troop-contributing countries – including France, which is both a troop-contributing nation and a permanent member of the Security Council – and was flatly rejected by Lebanon.

Goksel explained that Haley’s charge for significant changes was always going to be an uphill struggle as they would be hard to pass at an international level and hard to implement on the ground.

Put simply, he highlighted how sending UNIFIL to disarm Hezbollah would destabilize the south and would never be met with agreement from the international community.

“Where are you going to find the soldiers to do what Ms. Haley and the Israelis say, that UNIFIL should disarm Hezbollah? Which countries are going to send soldiers here to take on Hezbollah in a Shiite southern community?” he asked.

Despite the limited and lightly worded changes to the force’s mandate, Israel’s Ambassador to the U.N. Danny Danon also called the terms “a victory,” and the sentiment was quickly picked up by the Israeli media. Now, the headlines ran, UNIFIL would finally be able to enforce its presence across south Lebanon with patrols, and robustly take on Hezbollah.

However, as UNIFIL says repeatedly, it already conducts widespread foot and vehicle patrols, already had the mandate to prevent the illegal spread of non-state arms in the south, and has relative freedom to go where its mandate requires.

The new additions are unlikely to bolster those activities significantly without a very significant change in the attitude of the secretary-general, the international community and the UNIFIL commander.

Goksel said that the situation on the ground in South Lebanon hasn’t changed markedly since last year to require the tougher stance from the U.S. ambassador to the U.N.

“In all these years, the Americans … were frequent visitors to the south but they didn’t raise issues at the Security Council level until [Nikki Haley] showed up,” he said.

“For the last 30 years, if this is what was happening in the south, why was [the U.S.] keeping quiet?”

Ahead of Wednesday’s vote, Foreign Minister Gebran Bassil hosted a meeting with diplomats from the five permanent Security Council members to insist on the need to renew the UNIFIL mandate unchanged.

When reached for comment on the outcome, Bassil’s office pointed The Daily Star to a tweet he had posted earlier in the day. “We succeeded this time in diplomatically overcoming ‘cuts’ that would have modified the powers of UNIFIL; I believe that it will require more next year. Let us prepare!” he tweeted.

Indeed, the wording of the new UNIFIL mandate was even greeted by Hezbollah leader Sayyed Hasan Nasrallah during a televised address Thursday evening as he thanked Bassil for his efforts to counter a significantly increased role for the peacekeepers. He said the foreign minister had managed to “block” major amendments and stopped a U.S., Israeli and British scheme to tighten the noose on Hezbollah.

In the end, the wording of the new mandate, which France played a strong hand in drafting, has allowed Haley, Israel, Hezbollah and Lebanon to all claim a victory.

But the true test will be how it is adopted into the daily work of UNIFIL, and whether it remains business as usual.

A version of this article appeared in the print edition of The Daily Star on September 01, 2017, on page 2.