The cries of ‘Ya Hussain’ were amplified to a near deafening roar by the towering banks of speakers lining the crowded streets while overhead the slate grey skies drizzled rain. In Beirut’s southern suburb of Dahiyeh, nearly a million Shia Muslims were on the streets. Everywhere, men with their heads in their hands sat on the ground, leaned against lampposts and lined shop fronts. Many were openly crying and all were dressed in black. November 4, 2014 was the day of Ashura, the annual commemoration that marks the death of Hussain, the grandson of Mohamed, at the battle of Karbala in 680. The death of Hussain solidified the split between Sunni and Shia Muslims and is marked with grief by Shia Muslims all over the world in the first month of the Islamic calendar. 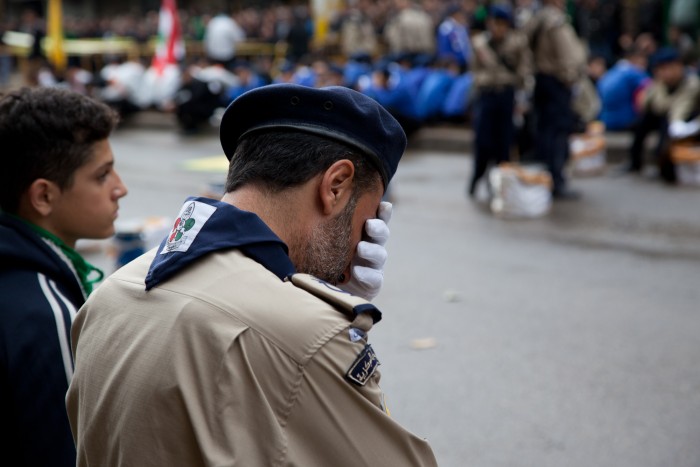 Ashura has a reputation for bloodshed as, in parts of Lebanon, Iraq and elsewhere, it is commemorated by self-flagellation, cutting the head and parading through the streets covered in blood. But Shia-majority Dahiyeh is infamous as being the stronghold of Lebanon’s powerful militia Hezbollah who have outlawed the practice of self-cutting. However, bloodshed was still at the forefront of everybody’s minds on November 4. 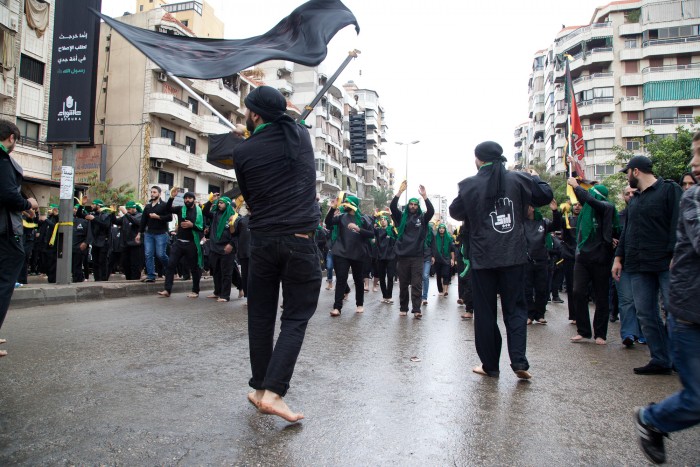 Due to Hezbollah’s involvement in Syria on the side of embattled president Bashar al-Assad the group has become a target for rebel groups from Syria. Many feared that the commemoration would be a target for attack. Since last year the Islamic State (IS) has grown in strength, and violent clashes between the army and Hezbollah on one side and Syrian extremist groups on the other – including IS affiliates – have taken place in both the Lebanese-Syrian border town of Arsal and in Lebanon’s second city, Tripoli. On top of this there is a vacuum caused by the lack of a president in Lebanon, which makes conditions unstable.

The whole of south Beirut had been closed off well in advance of Ashura and numerous army and Hezbollah checkpoints had to be navigated to get close to the commemorations. Once on the streets of Dahiyeh, security teams and heavily-armed militia men could be seen watching over the processions that formed to march through the streets.

As the grey clouds started to clear and the sun shone through, thousands gathered into long processions, led bythe local scout troops who headed the procession with Lebanese, Palestinian and Hezbollah flags as well as large portraits of Shia and Hezbollah leaders — including Secretary General Hassan Nasrallah and Grand Ayatollah of Iran Ali Khamenei. As the procession wove its way through Dahiyeh, men beat their chests and roared chants of “For you Hussain,” while crowds of men, women and children looked on. One security official estimated that between 600,000 and a million people had come to mark Ashura in Dahiyeh this year. 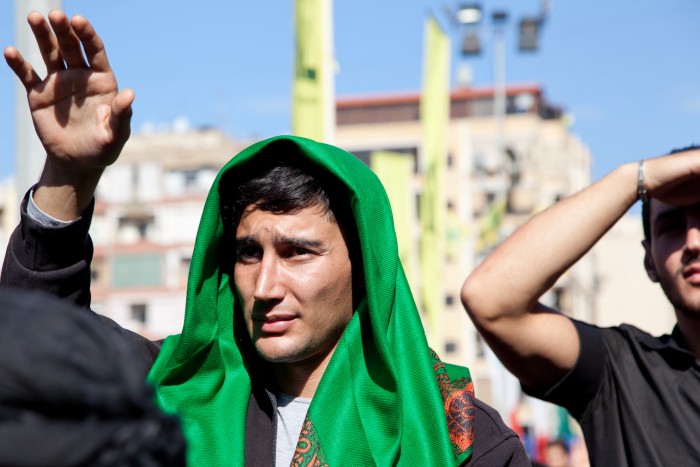 The procession ended in a central square where a large screen had been set up to show a broadcast from Nasrallah. He had made a somewhat rare in-person appearance the day before on November 3, in which he had called for Lebanese unity. But via video link on November 4, Nasrallah delivered a fiery speech in which he reassured supporters of their victories in Syria and warned that the militia was ready for a war with Israel, despite their Syria involvement. The speech was met with cheers from loyal supporters, many of whom are devoted to the leader of Hezbollah.

Some of my images were used on Al-Jazeera coverage of the event. For an altogether more bloody view of Ashura from South Lebanon take a look at my coverage of last years event on my picture blog and The Economist